I’ve recently been learning to fly at a flying club in the Chilterns and had taken a couple of weeks off work at the end of September to build some hours and hopefully go solo. Sadly due to a combination of my ineptitude and weather it wasn’t to be, but I have been steadily using up my annual leave to go up there during the week to fly (for reasons various we can’t do circuits at the weekend).

So yesterday I headed out of the house at 5.30am to catch a train out of Marylebone ready to fly for 9.30. We spent a couple of hours doing circuits in the morning but with a moderately strongly crosswind my final approach and landings just weren’t good enough. After lunch a huge thunderstorm and downpour led me to think that flying was over for the day (we even put the aircraft away in the hanger) but we hung on and after the weather had passed flying conditions were perfect; not a drop of wind and excellent visibility. We did a couple of circuits and my instructor said they were the best landings I’ve ever done and told me to stop at the side of the runway. He got out and told me to take off, do a circuit and see me back at the hanger to refuel; I was a little nervous as I taxied back to the threshold but I knew I’d be able to fly a circuit and land safely even if it wasn’t going to be the prettiest. Everything went really well, although I forgot to make my radio call for finals until a little late and the approach was a little high but not too bad.

I got lots of congratulations from everyone at the club and couldn’t stop grinning. Here’s me shortly afterwards looking a little frazzled: 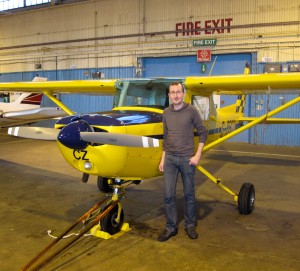